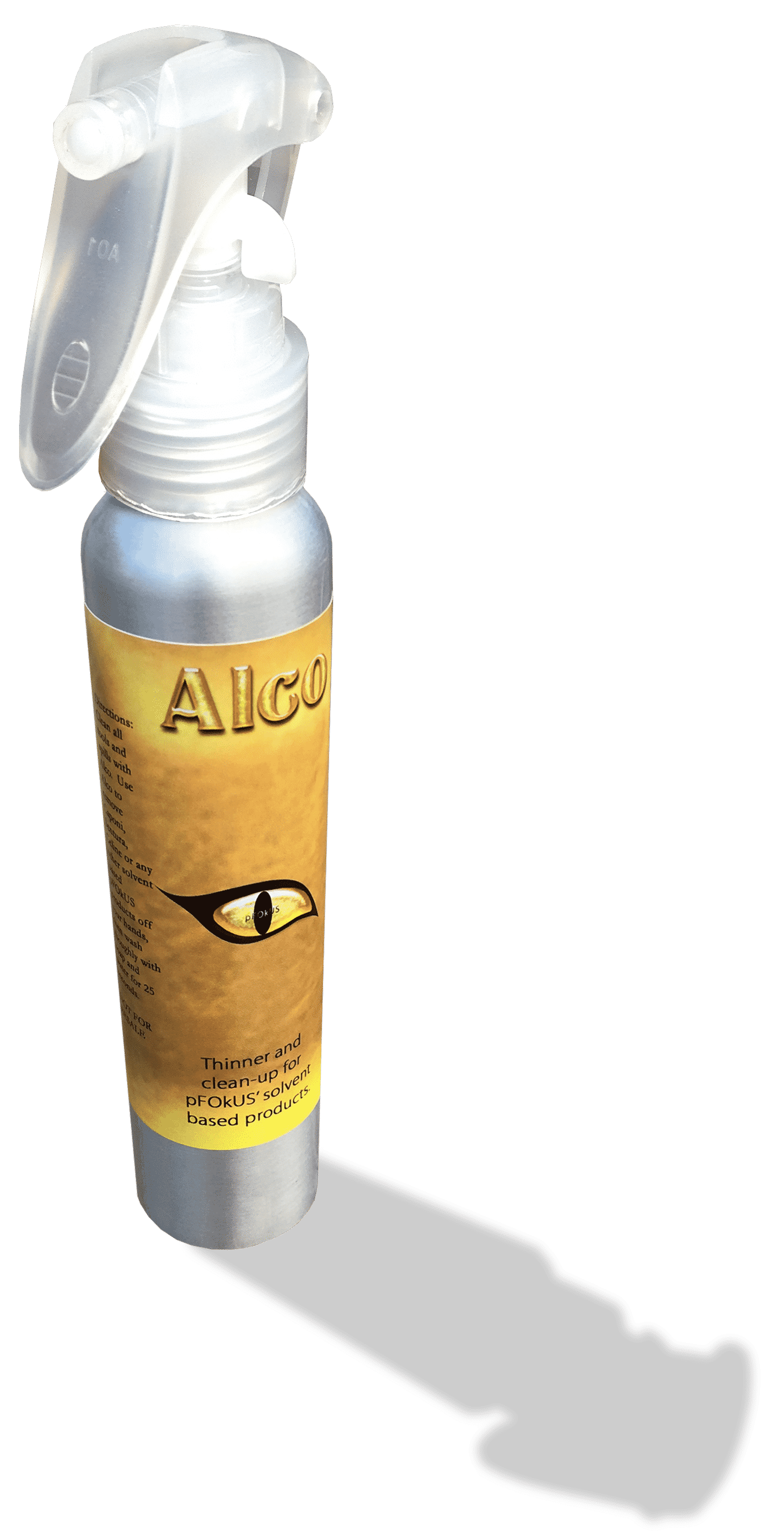 Alco. The thinner & clean-up
for Caponi and Sentura.

Professionals love to use two part solvent based sealers that pFOkUS manufactures. The solvents are not cleaned up or thinned with water, so Alco – a quality paint thinner and reducer, is needed. So when these products are purchased, we highly recommend Alco.
Buy Now >

Alco is a natural alcohol based thinner.

Before using just any paint thinner, you need to know that there are different paint thinners for specific applications. Oil-based and solvent sealers will require different reducers to thin the sealer. Read pFOkUS’ recommendation on how to use the right thinner for clean-up and the correct ratio. Below we list what products use Alco. The mix shall be prepared carefully adding Alco slowly and mixing it thoroughly. Normally, a ratio of 10:1 is used for Caponi and Sentura.
Buy Now > Watch Alco Video > 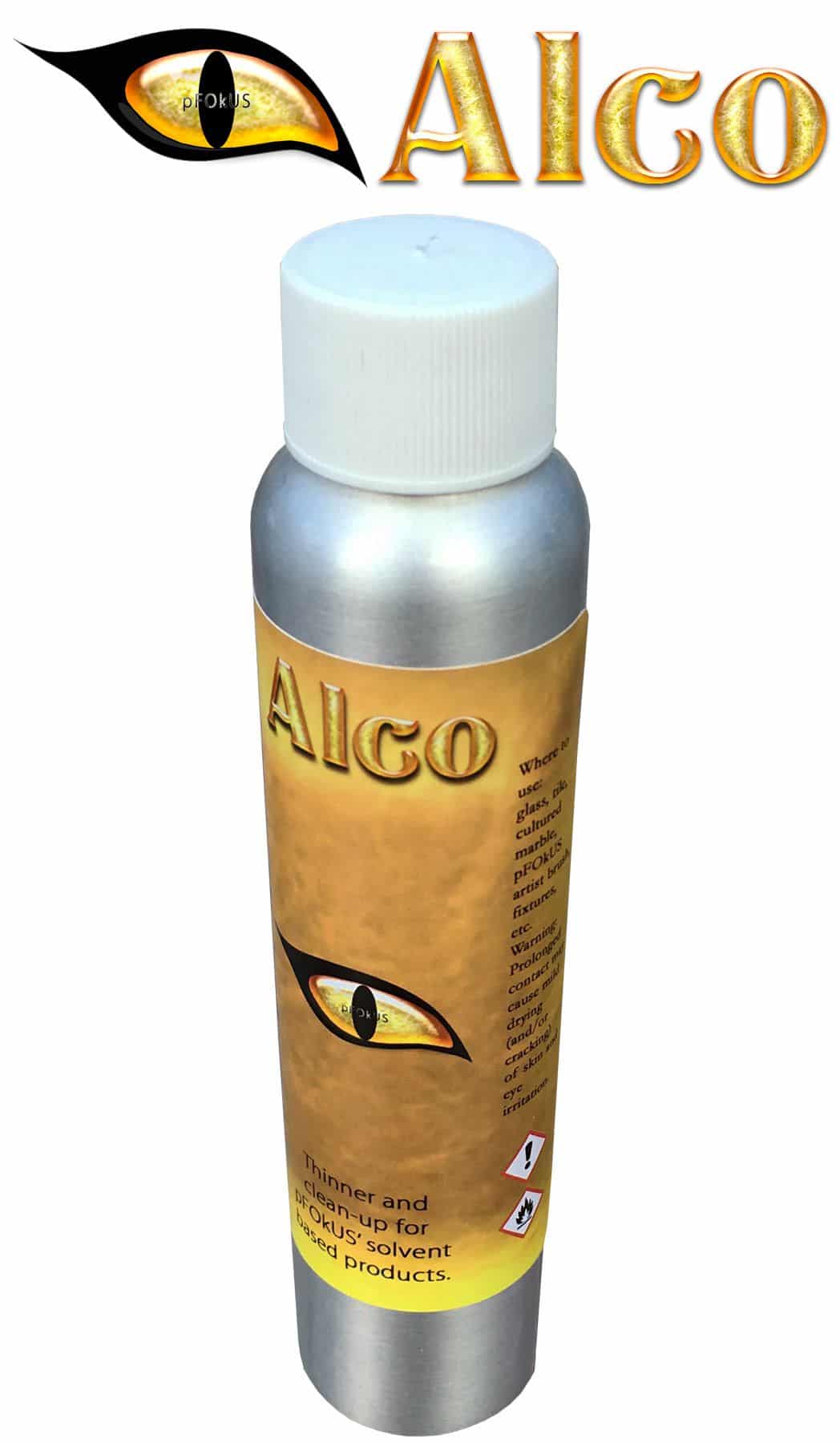 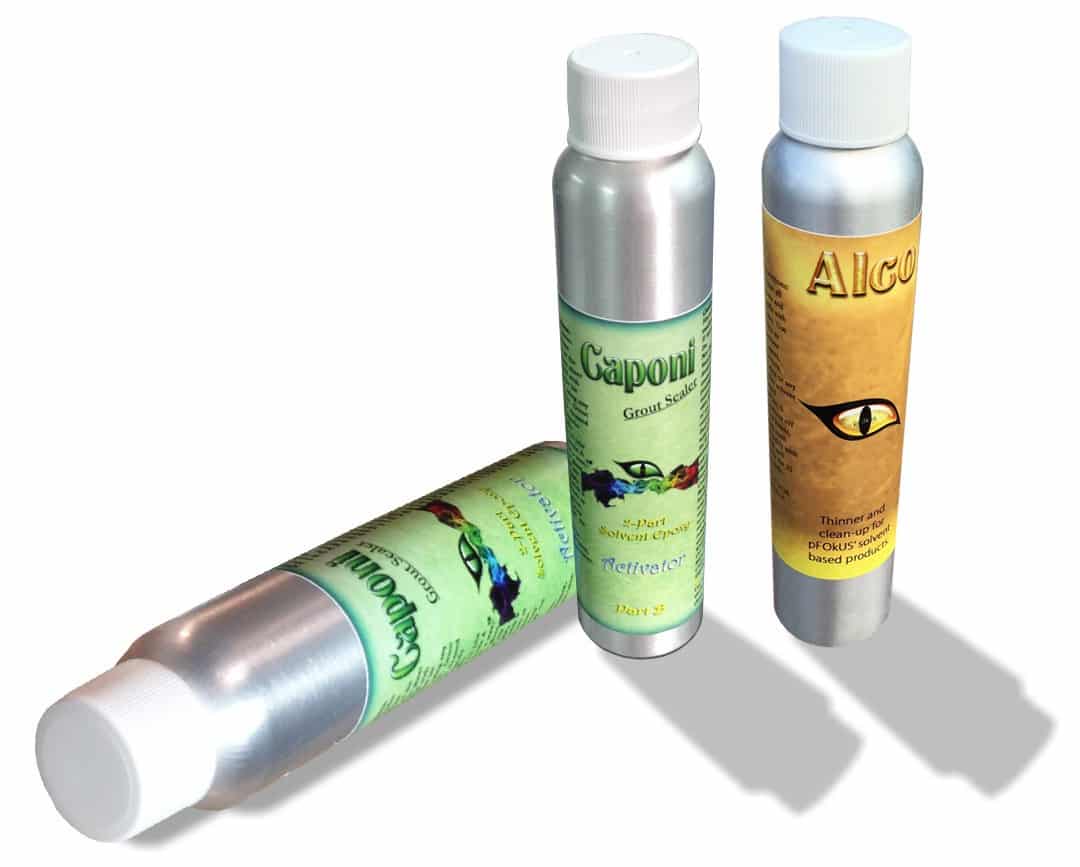 Caponi is a two part titanium pigmented grout sealer. Its protection leaves a meticulously uniform color and delivers an intense chemical resistant surface, while waterproofing grout. Caponi can be thinned with our patented paint thinner and reducer, although we highly recommend not thinning Caponi from the start. As the pFOkUS paint brush becomes thicker when the seal starts to dry, spray Alco on the brush and it will keep the sealer loose.
Buy Alco Now >
Caponi Grout Sealer >
pFOkUS paint brush >

Sentura is a flexible two part solvent based epoxy/resin used in showers, pools, floors, and any application that takes abuse. Sentura is used instead of caulk in showers, repairs cracked grout, cracked stone and is very ply-able. Sentura can be thinned with Alco at a 10:1 ratio or Caponi can be used as a thinner and it will add pigment to the Sentura to color match the surface. Then, Alco can be used as a clean-up for both products.
Buy Alco Now >
Caponi Grout Sealer >
Sentura Caulk Substitute > 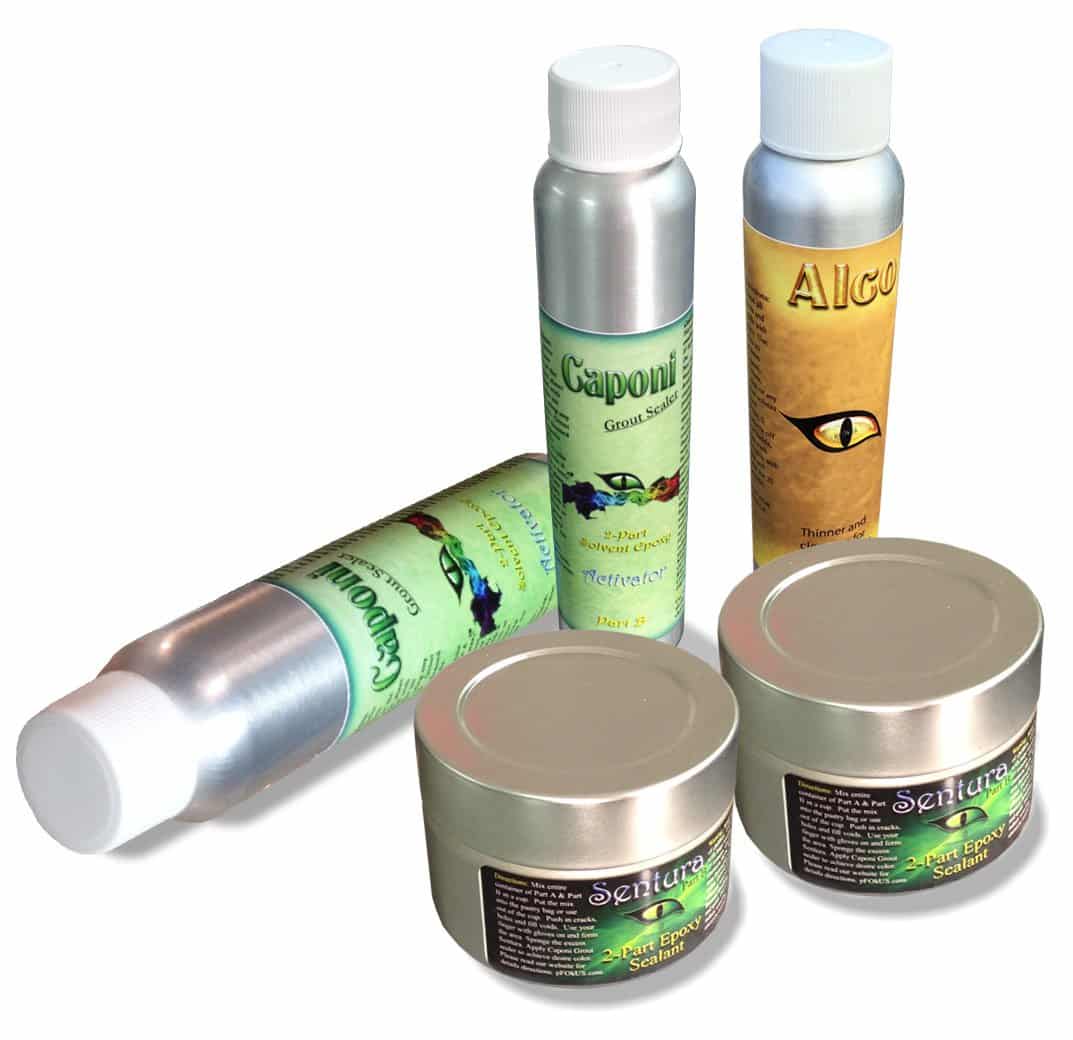 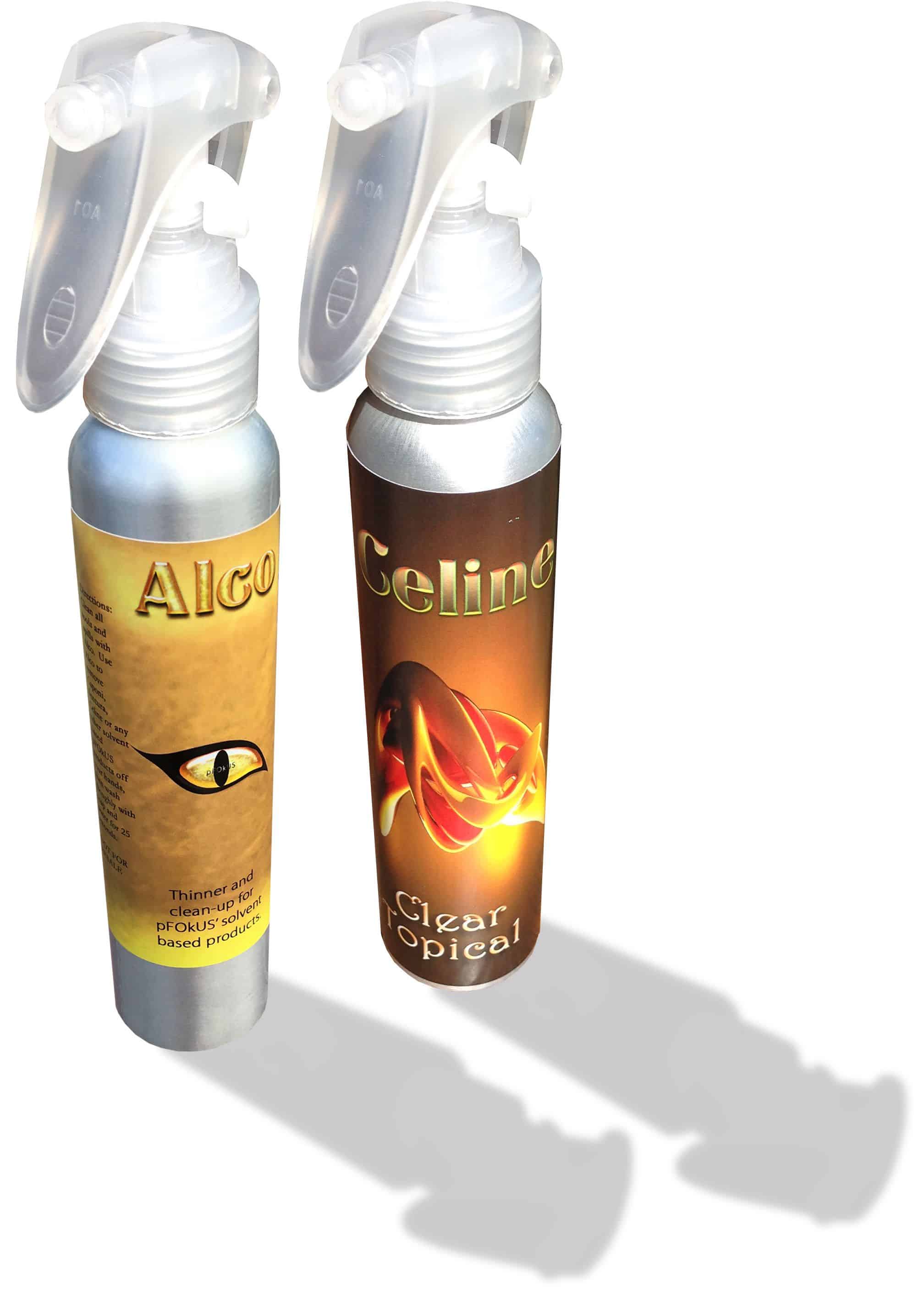 Celine is a solvent based clear high gloss stone and grout sealer. Celine not only seals the surface, it will waterproof the surface preventing damage to the stone in showers and exterior stone. Alco is used to clean-up tools and spills caused with Celine. Within a couple days of curing, Alco can be used to strip Celine off the surface. Thereafter, it will not remove Celine.
Buy Alco Now >
Celine stone & grout sealer >

We're not around right now. But you can send us an email and we'll get back to you, asap.